On a bitter-cold stormy day, January 11 1932, a farmer on the plains of western Oklahoma reached a neighbour’s house a mile away who had a telephone, and the doctor was summoned to come and assist the birth. Because of the deep snow, the doctor carried his black case and walked the last quarter of a mile. By the time the doctor arrived, the baby boy had already made his appearance! Richard Hester was born.

There was much work on the farm, and Richard learned at five years of age to feed the cattle, milk the cows and do the other chores common to country life. His mother was sick for a time, and his father told him he must learn to do all the tasks in the home before he would be big enough to do everything outside with his father. So he managed to keep food on the table, wash, iron and clean the house, along with the detailed instructions and urgings of his sick mother.

At seven years of age he began driving a tractor in the fields ploughing, seeding, mowing. At the age of eleven his father fell sick during the autumn maize harvest, and he was called upon to meet the challenge. He finished the maize harvest after the first snows, driving the tractor and operating the combine, then trucking the maize to a large granary. When hardships would make it so easy to quit responsibility and hard work at a young age gave him a firm foundation for life and later service for Christ.

The first eight years of education took place in a one-room country schoolhouse with a potbelly stove centrally located to counter the winter’s bitter cold. Each of the 20-30 students from the eight grades would recite some of their lesson to the one teacher. The modern educational strategies were unknown; reading was taught phonetically, and mathematics had its tables to master. Reading became very important for Richard at an early age. 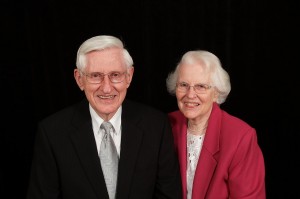 Attending a community church was a set habit of life. The Bible was loved and respected in his home. However, there was not a strong teaching on just how to be saved nor on the assurance of salvation. Richard Hester lived a clean life, free from the vices and defilements that a sinful society promotes.  He has always been thankful that a cigarette never entered his lips nor alcoholic beverages, and that he would reach the marriage altar pure from sexual sins.

After one year of studying Agriculture at College in Goodwell, Oklahoma, Richard began to search and he desired to know if the Bible were really true, and if so, does it show us how to get salvation and know that we have it? He came to a true knowledge of Christ as Saviour in June 1950.

Shortly after conversion, the call of God to the ministry became a heavy burden on his heart from which he could not escape. He consulted his father who told him that it was the greatest privilege to be a minister if God calls, and he advised his son to make sure of the calling, and having answered the call to never turn back.

Richard completed his second college year and transferred to Bob Jones University (BJU) in Greenville South Carolina to study for the ministry. During the period of three and a half years at BJU God wrought some far-

reaching changes in his life. Firstly, he soon determined to leave the system of doctrine that emphasised experience. Secondly, he settled on the independent Baptist doctrinal position and set out to look for it going briefly to churches of differing persuasions in the process. The search ended at First Bible Baptist Church in Wichita, Kansas, where he found a church that believed what he had come to believe that the Bible taught.

Lastly, biblical principles for standards and disciplines would become a real part of his life through his training at BJU. He became fully persuaded of the doctrine of ecclesiastical separation which rejected an accommodation of false doctrine and unbelief in ecclesiastical relationships for the sake of promoting a program.  He was taught, “it was never right to do wrong, in order to get a chance to do right.”  Richard had experienced the frustration and weakness of a sentimental, emotional theological stance, and his newly-found foundation of eternal, biblical principles gave a firm conviction and direction for the young preacher amidst these controversies. These same biblical principles for separation and purity would be further strengthened and reinforced several years later at Baptist Bible College when he was preparing for missionary service to Lebanon.

The Lord opened doors to hold several evangelistic meetings with the assistance of three talented musicians.  One of these meetings was held in his country home community at a schoolhouse, where several adult neighbours, parents of his friends, and young people accepted Christ. As a result of that meeting, his younger brother also accepted Christ.

Following graduation in 1954 from BJU Richard went to El Dorado, Kansas, to plant Temple Baptist Church. A congregation was established and a church building erected. While playing the organ in another church revival, he met his wife Kathleen, also a farm girl, who had a strong desire to serve the Lord and had prayed for a preacher husband. She had promised the Lord that she would be willing to be a missionary.

Richard was concerned for missions while at BJU and had promised the Lord that he was willing to go anywhere the Lord directed. Later as a new pastor he attended the Tulsa Baptist Temple Missions Conference in 1955 and 1956. He and his wife attended in 1957, and the Lord ignited that love for missions.  A month after that missions conference both Richard and Kathleen separately surrendered to the mission field, which was a further confirmation of the Lord’s working and direction in both of their lives.

In preparation for mission work in Lebanon, they both attended Baptist Bible College in Springfield, Missouri, where he took a year of missions courses, and she graduated as the class speaker for the ladies. In 1958 they were approved as missionaries with the Baptist Bible Fellowship and arrived on the field in Tripoli, Lebanon in 1959. Richard and Kathleen Hester learned to speak, read and write Arabic and Richard began preaching in the Arabic language in 1960.  A ministry of church planting, evangelism and camp ministries was carried on in North Lebanon for nearly seventeen years.

Lebanon was their life and home. But a tragic civil war would disrupt their place of ministry. The Hesters with their two daughters later left Lebanon for what they thought would be only a brief absence until things improved, but it turned into a permanent change of field.

After leaving Lebanon the Lord soon led the Hesters to an extension of their ministry with their beloved Arabic people, and they arrived in Sydney, Australia in 1976. There they would minister among an Arabic-speaking population of some 250,000 immigrants as well as teach in the Australian Sydney Bible Baptist College.

Faith Baptist Church was planted officially in January 1977 with the first meetings comprising of about 15 people in their then home in Punchbowl. As the church grew meetings were moved to Croydon Park in August that year. An offer to buy the church building was accepted in June 1978 and the dedication of the property was on January 21, 1979. Another church named Faith Baptist Church – Blacktown was planted in February 1989, and that ministry is reaching out to its local community and surrounding suburbs in Sydney’s northwest.

Health problems, which began prior to leaving Lebanon and continued to compound were diagnosed as multiple sclerosis in December 1986. The progressive loss of sight and the physical weakness and total exhaustion have limited his ministry in one sense, but have, in another sense, opened up a dramatic dimension of ministry never before known to him. No doubt has been left: the Lord has done all things well and to Him belongs all the credit.

Since handing over the leadership of Faith Baptist Church in 1992. Richard and his wife have found themselves in great challenges for ministry. Richard Hester became the principal of the Sydney Bible Baptist College in 1995 at a time when the college faced closure. God has done and continues to do great things at the college, and it is returning to growth.  Additionally, in 1999 he took up as interim pastor at Faith Baptist Church – Blacktown that desperately needed help.  After nearly four years of ministry in that church, the leadership has now passed to another “Lebanese son” who is a real blessing.

These challenges are demanding of  all that both of the Hesters can give. In Pastor Hester’s words, “Kathleen is my constant helper; chauffeuring, helping to revive me out of the chronic physical valleys, reading letters and articles which are beyond my ability to read, and generally being my eyes and ears.”  The MS has left him with about a quarter of one eye’s sight, hearing problems and a chronic syndrome of fatigue and weakness.  A slight stroke in 1996 slowed Kathleen’s abilities to cope physically as well.

The Hesters feel strongly that their lives and ministries will continue on in Australia throughout the years that God sees fit to give them. They would like to continue to offer a hand of encouragement and counsel in the ministry even with the limitations of health and older age. This has included ministry trips to Lebanon such as in 1993, 1995, and 1997.  These trips were blessed of the Lord in encouraging the fine independent Baptist congregations throughout Lebanon.

Besides his ministry as principal, both of the Hesters have been heavily involved in teaching at the Sydney Bible Baptist College. That teaching schedule is slowing to make place for more effective priorities. They believe God has prepared them during the years of ministry for this exciting and unique ministry at this stage in their lives. The Hesters are burdened to encourage and aid college students and Australian preachers in every possible way. The Hesters’ lives will remain full of purpose and ministry regardless of physical limitations.
The testimony, which the Hesters would like to leave from nearly fifty years of ministry is twofold, firstly, that of God’s faithfulness, loving care and guidance. He is a God Who can take seeming tragedy, destructive uprooting, poor health and any other difficulty, and make them all a vehicle driven by His eternal purposes for blessing to souls in the task of world evangelism.  Richard has said many times, “The greatest blessing to our lives and ministries has been the tragedy of Lebanon and the dominant sickness that drove us to the very edge of having to leave the ministry which we loved more than physical life itself.” The neurologist had advised Richard of the necessity to leave the ministry with its stresses for the sake of the MS condition.  Richard’s answer was: “The ministry is my life; I would rather die in the ministry than to leave it and live.”

Secondly, their testimony concerns their desire to be faithful and “finish the course.”  Richard often speaks of how he felt so insufficient and incapable of entering the ministry when God called. There was that depressing comparing of himself with others of great and many talents. Then came the helpless cry of his soul to God in surrender and promise to give the “little” he had to the Master for His use. Finally, the deep conviction came that God would use the weak vessel, and this truth ever fuels his heart’s burning desire to be faithful and never quit, to not compromise eternal truth regardless of the cost, and to hold to the course. That is it:  God’s faithfulness and the human passion to be faithful to the Faithful One until the course is finished.

“Faithful is He that calleth you, who also will do it.”
1 Thessalonians 5:24”